Do you want to learn Docker FOR FREE OF COST? Yes, you read it correct. Thanks to a playground called “play-with-docker” – PWD in short. PWD is a website which allows you to create 5 instances to play around with Docker & Docker Swarm Mode for 4 hours – all for $0 cost. It is a perfect tool for demos, Meetups, beginners & advanced level training. I tested it on number of web browsers like Chrome, Safari, Firefox and IE and it just works flawlessly. You don’t need to install Docker as it comes by default. It’s ready-to-use platform.

Currently, PWD is hosted on AWS instance type 2x r3.4xlarge  having 16 cores and 120GB of RAM. It comes with the latest Docker 17.05 release, docker-compose 1.11.1 & docker-machine 0.9.0-rc1. You can setup your own PWD environment in your lab using this repository. Credits to Docker Captain – Marcos Nils & Jonathan Leibuisky for building this amazing tool for Docker Community. But one of the most interesting fact about PWD is its based on DIND (Docker-in-a-Docker) concept. When you are playing around with PWD instances & building application stack, you are actually inside Docker container itself. Interesting, isn’t it? PWD gives you an amazing experience of having a free Alpine Linux  3.5 Virtual Machine in the cloud where you can build and run Docker containers and even create Multi-Node Swarm Mode Cluster.

Said that, PWD is NOT just a platform for beginners. Today, it has matured enough to run sophisticated application stack on top of it. Within seconds of time, you can setup Swarm Mode cluster running application stack.Please remember that PWD is just for trying out new stuffs with Docker and its application and NOT to be used for production environment. The instances will vanish after 4:00 hours automatically.

Under this blog post, I am going to showcase 3 out of 5 cool Dockerized application stack which you can demonstrate to the advance level audience all running on PWD playground (listed below):

To make it quite simple, I have collected the list of sample application under https://github.com/ajeetraina/docker101

You can use git clone to pull the repository on the manager node:

First, we need to setup Swarm Mode cluster on PWD. As Docker 17.05 already comes installed by default, we are all set to initialize the swarm mode cluster. Click on “New Instance” button on the left hand side of PWD and this will open up an instance on the right side as shown.Run the below command on the 1st instance as shown below:

This command will initialize the Swarm and suggest a command to join the worker node as shown:

Once you run the command on all the 4 worker nodes. You can go back to manager node and check the list of Swarm nodes: 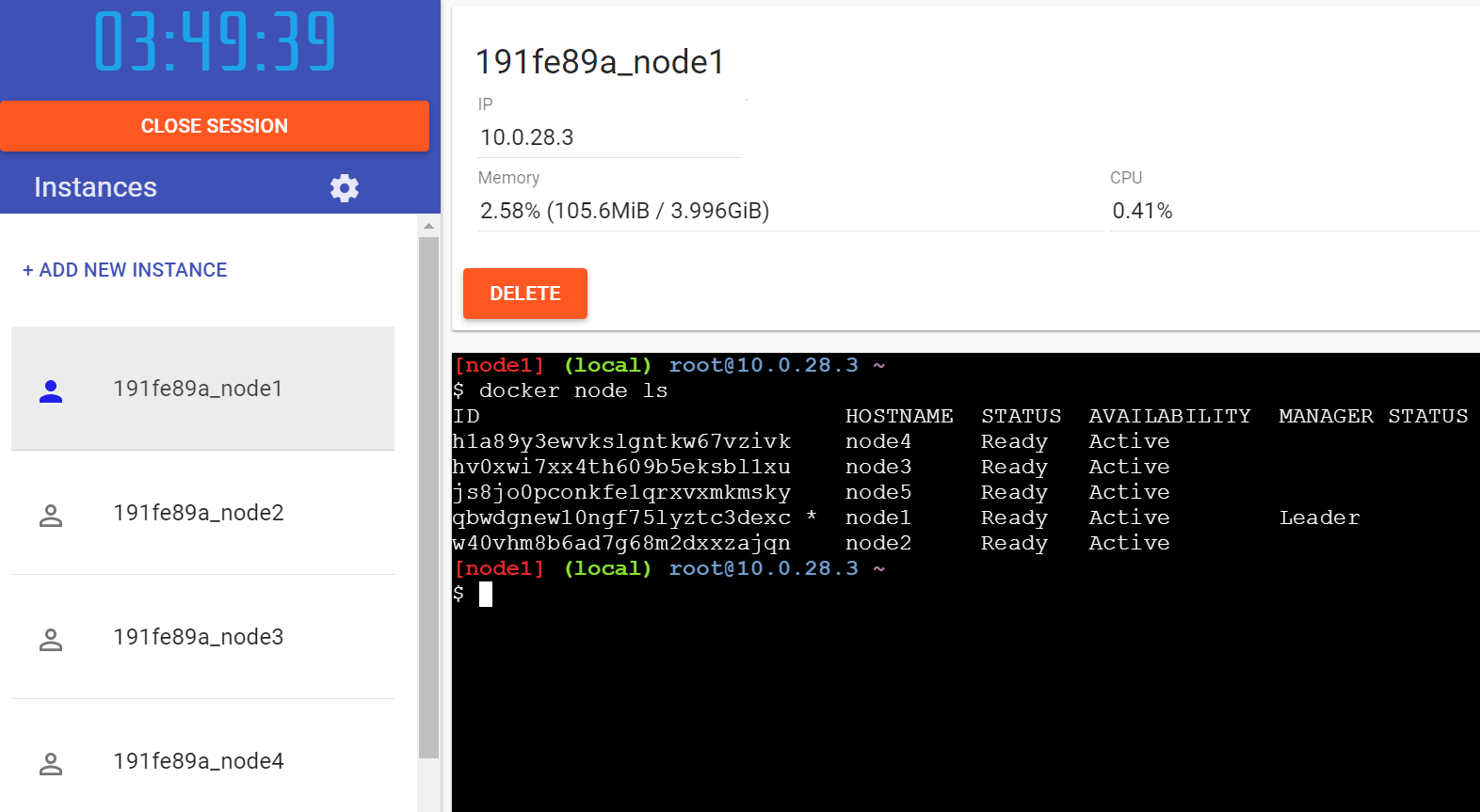 It’s time to get started with our first application – Portainer. Portainer is an open-source lightweight management UI which allows you to easily manage your Docker host or Swarm cluster. Run the below command to setup Portainer for Swarm Mode cluster:

Ensure that portainer is up and running:

The moment Portainer service gets started, PWD displays 9000 port which Portainer works on as shown. You can click on this port number to directly open the Management UI.

This opens up a fancy UI which displays lots of management features related to image, container, swarm, network, volumes etc. 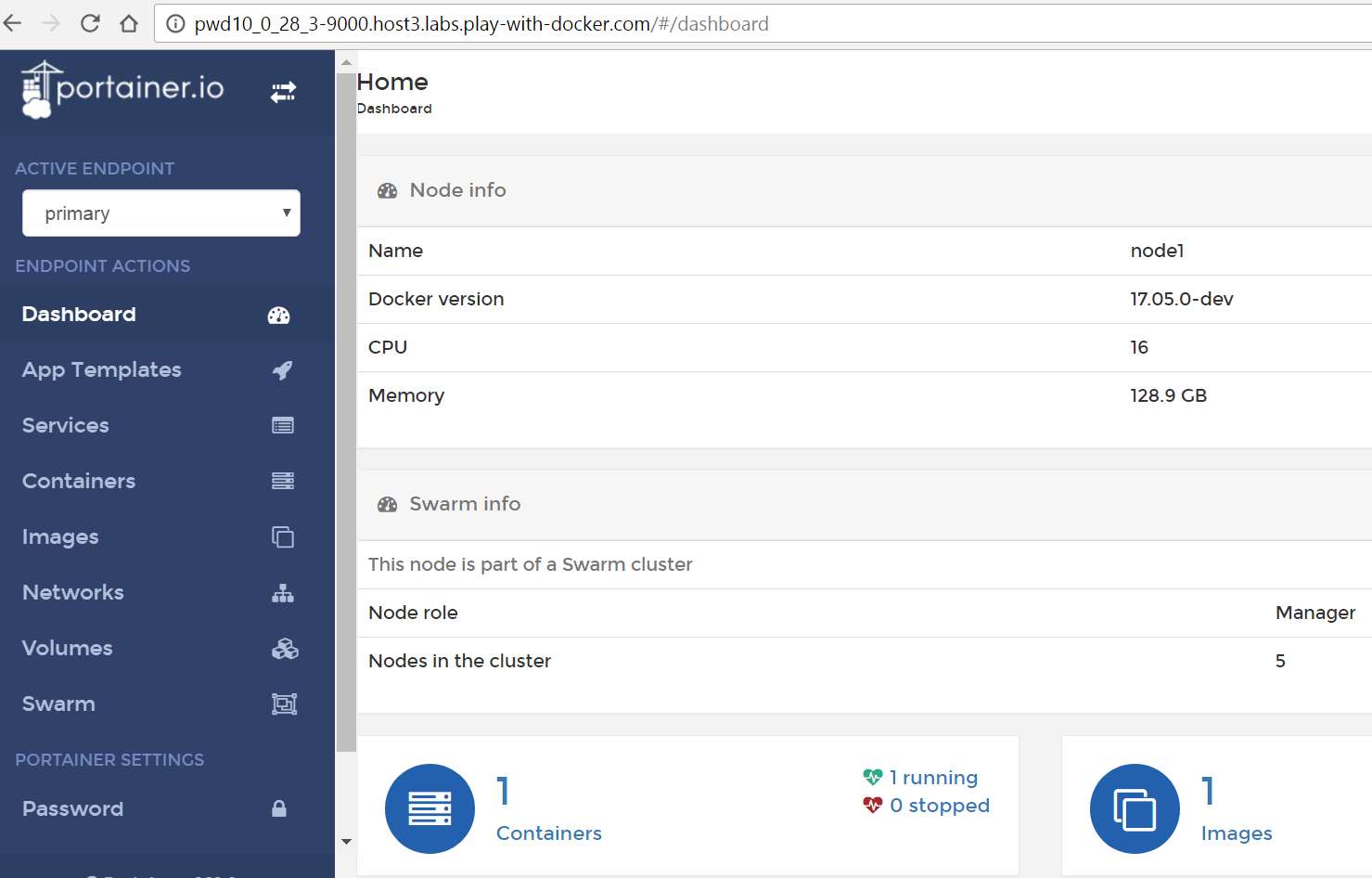 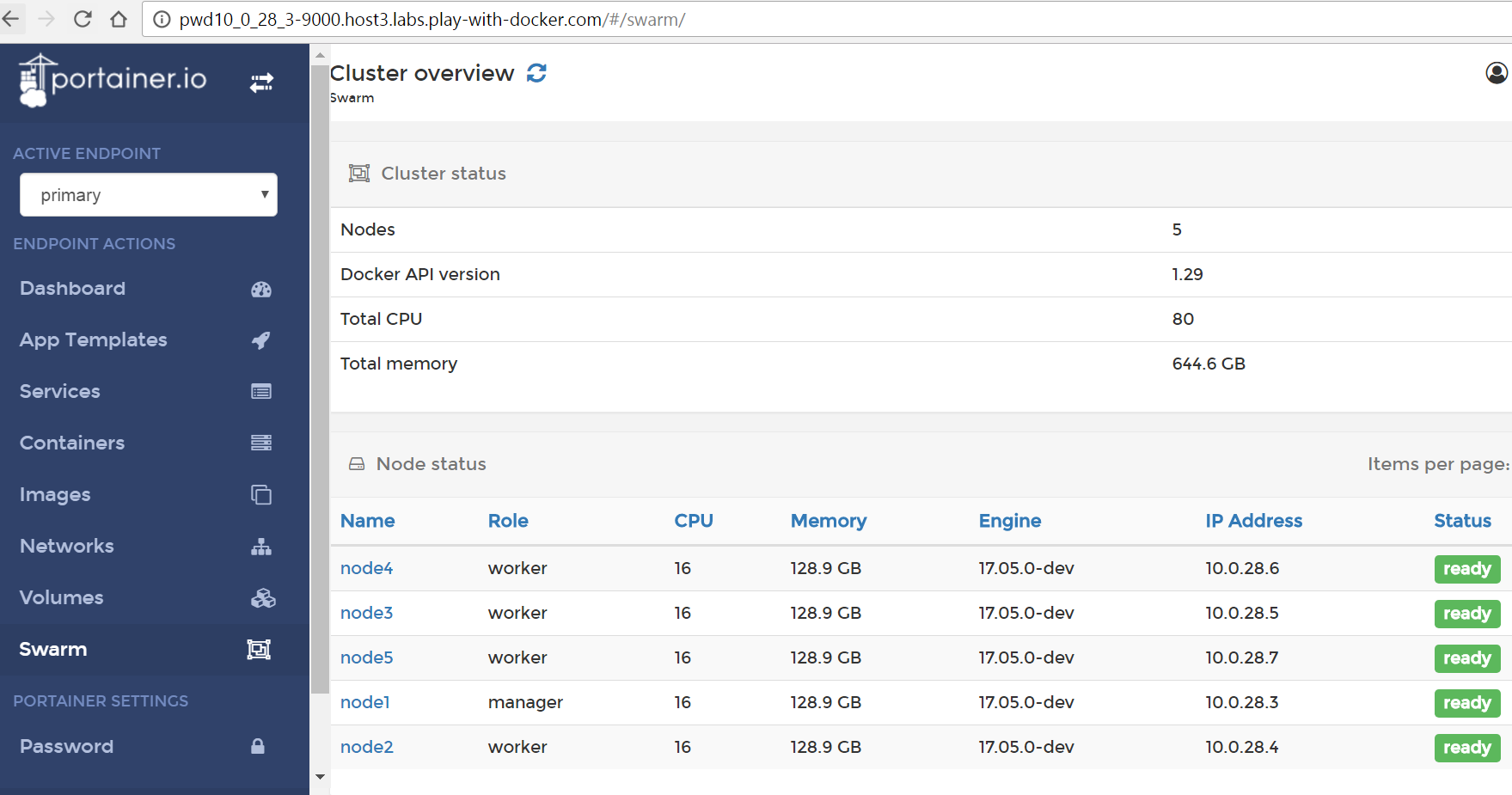 Portus is an authorization service for your Docker registry. It provide a useful and powerful UI on top of your registry. To test driver Portus, one need to clone the repository:

Run the below script with your manager IP to get Portus up and running:

Once this looks good, you should be able to browse its UI as shown: 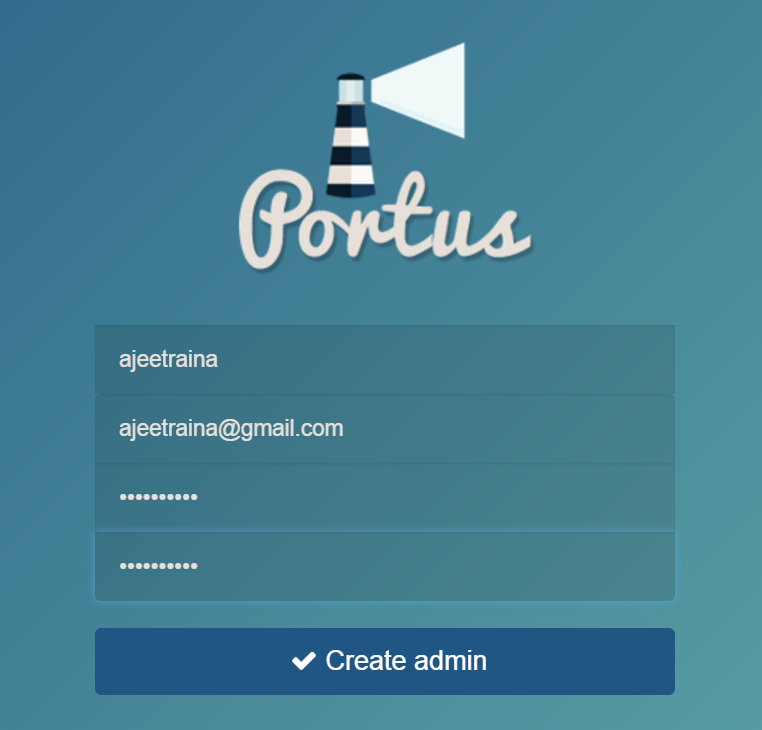 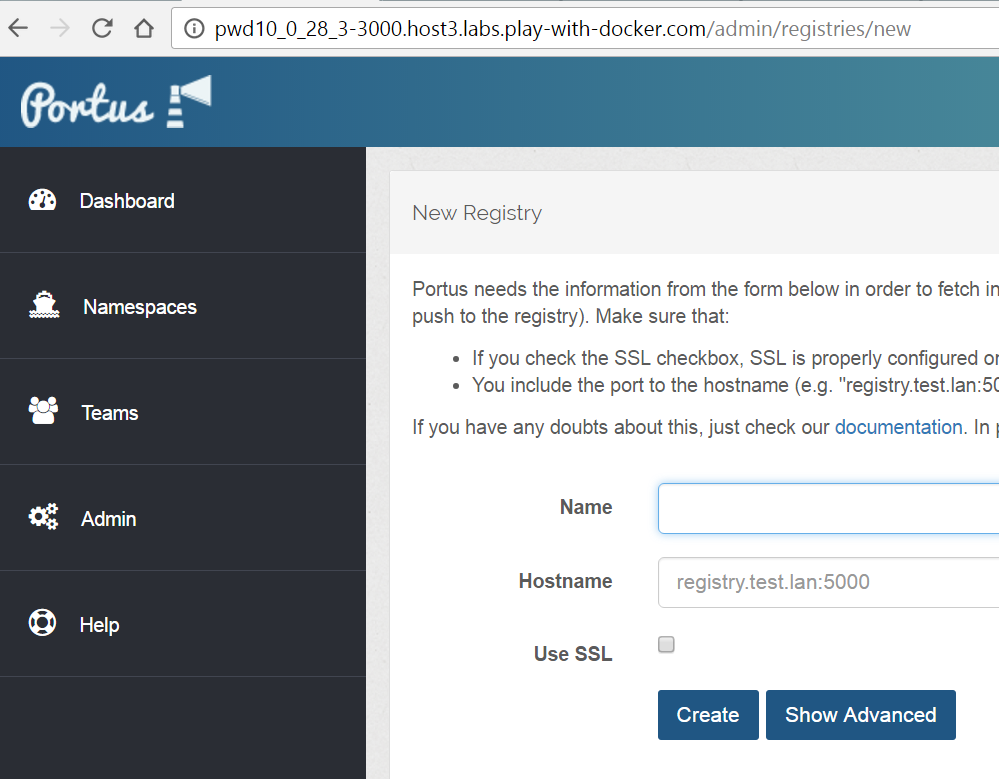 I faced the issue related to Webpack::Rails::Manifest::ManifestLoadError which I got it fixed within few minutes. You now have control over Docker registry using this fancy UI. You can create Users, Organization for your development team and push/pull Docker images privately.

To test-drive Prometheus & ELK, you can change the directory to /play-with-docker/docker-prometheus-swarm directory and run the stack deploy command as shown below:

[ A Special Credits to Basi for building https://github.com/bvis/docker-prometheus-swarm repository & tremendous effort for enabling this solution]

That’s it. Your Prometheus, Grafana & cadvisor for ELK stack is ready to be used. 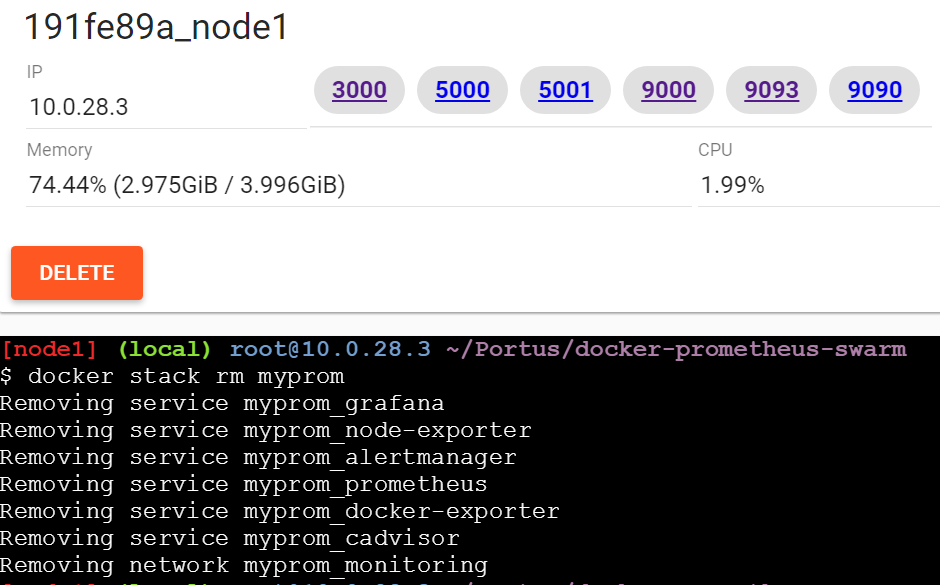 Voting app is a perfect piece of example where it showcase dependencies among the services, and a potential division of services between the manager and worker nodes in a swarm.  You can learn more about voting app and how it actually works under this link. To quickly demonstrate it, let us pick up the right directory under the pulled repository:

Run the below command: 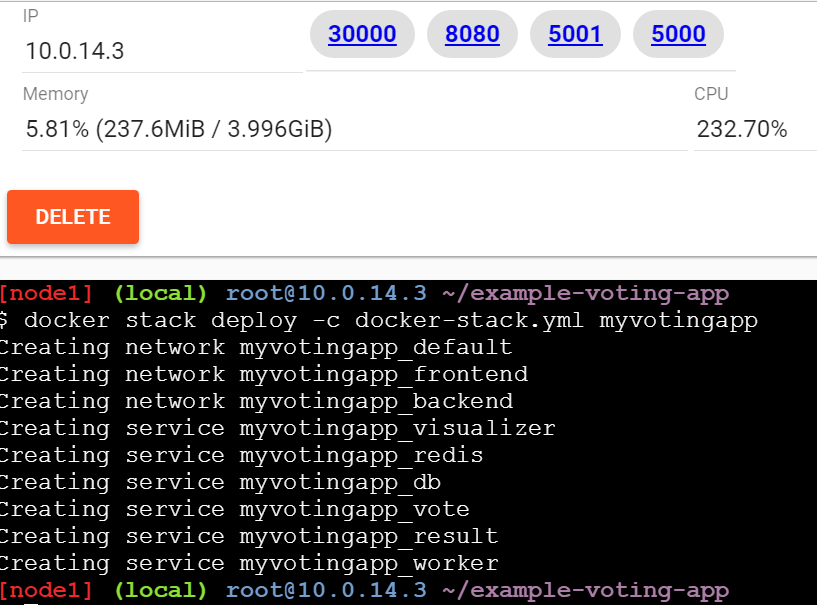 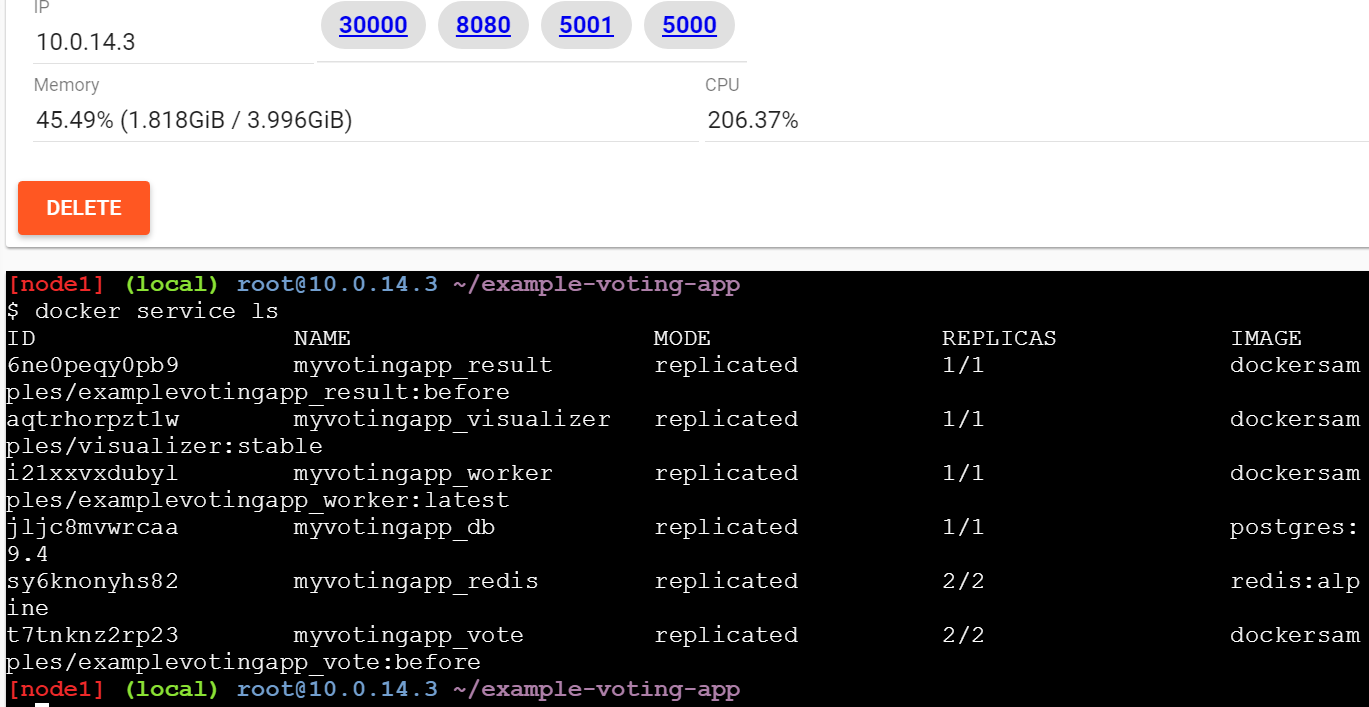 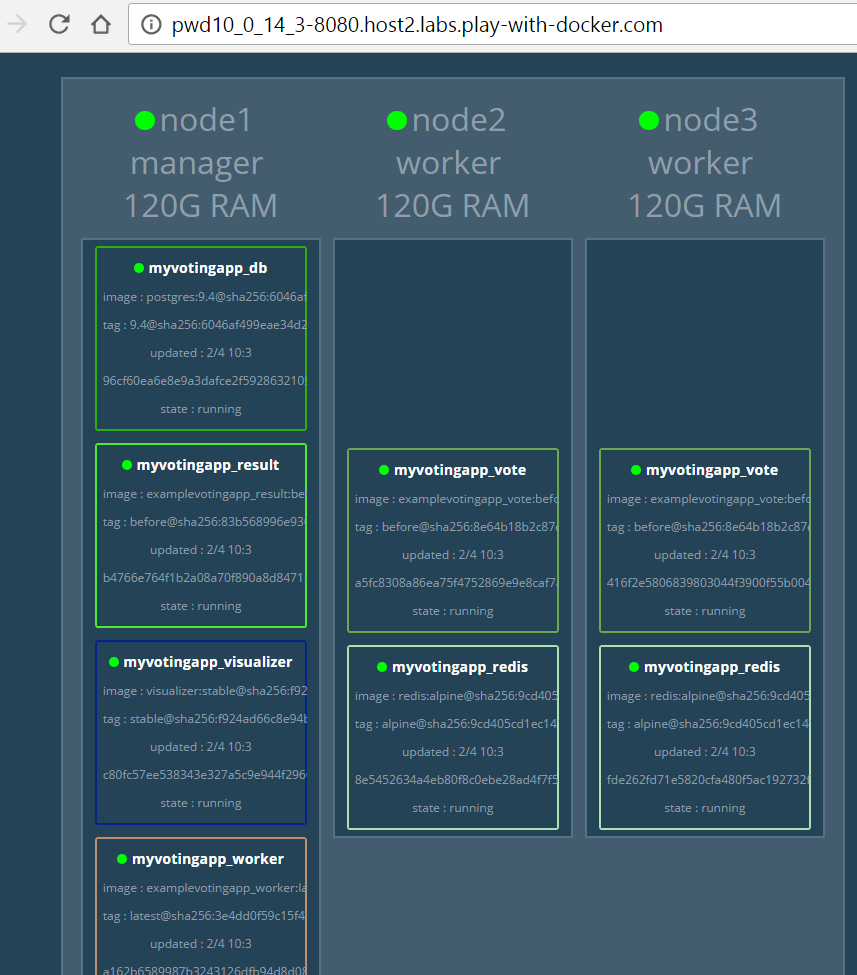 In the next series of this blog post, I am going to cover on other 2 application stacks – CloudYuga RSVP & WordPress Web Application.