When Kubernetes Meet Docker Swarm for the First time under Docker for Mac 17.12 Release

Docker For Mac 17.12 GA is the first release which includes both the orchestrators – Docker Swarm & Kubernetes under the same Docker platform. As of 1/7/2018 – Experimental Kubernetes has been released under Edge Release(still not available under D4M Stable Release). Experimental Kubernetes is still not available for Docker for Windows & Linux platform. It is slated to be available for Docker for Windows next month(mid of February) and then for Linux by March or April.

Now you might ask why Docker Inc. is making this announcement? What is the fun of having 2 orchestrator under the same roof?  To answer this, let me go little back to the past and see how Docker platform looked like: 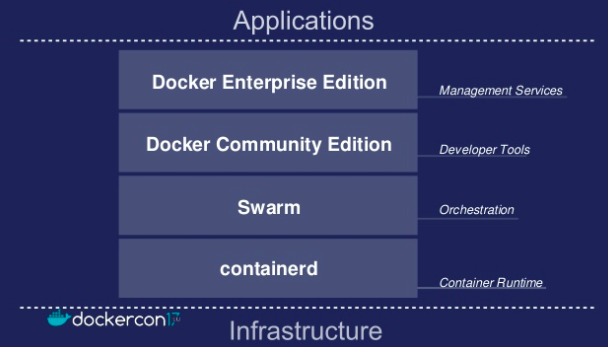 Docker platform is like a stack with various layers. The first base layer is called containerd. Containerd is an industry-standard core container runtime with an emphasis on simplicity, robustness and portability. Based on the Docker Engine’s core container runtime, it is available as a daemon for Linux and Windows, which can manage the complete container lifecycle of its host system: image transfer and storage, container execution and supervision, low-level storage and network attachments, etc. Containerd is designed to be embedded into a larger system, rather than being used directly by developers or end-users. It basically includes a daemon exposing gRPC API over a local UNIX socket. The API is a low-level one designed for higher layers to wrap and extend. It also includes a barebone CLI (ctr) designed specifically for development and debugging purpose. It uses runC to run containers according to the OCI specification. The code can be found on GitHub, and here are the contribution guidelines. Let us accept the fact that over the last few years, there has been lots of iteration around this layer but now Docker Inc. has finalised it to a robust, popular and widely accepted container runtime.

On top of containerd, there is an orchestration layer rightly called Docker Swarm. Docker Swarm ties all of your individual machines together which runs container runtime. It allows you to deploy application not on a single machine at a time but into a whole system, thereby making your application distributed.

If the stack looks really impressive, why again the change in architecture?

The reason is – Not everybody uses Swarm. 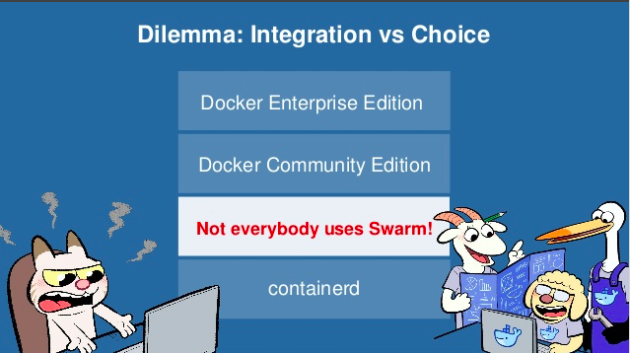 Before Swarm & Kubernetes Integration – If you are a developer and you are using Docker, the workflow look something like as shown below. A Developer typically uses Docker for Mac or Docker for Windows.Using a familiar docker build, docker-compose build tool you build your environment and ensure that it gets deployed across a single node cluster OR use docker stack deploy to deploy it across the multiple cluster nodes. 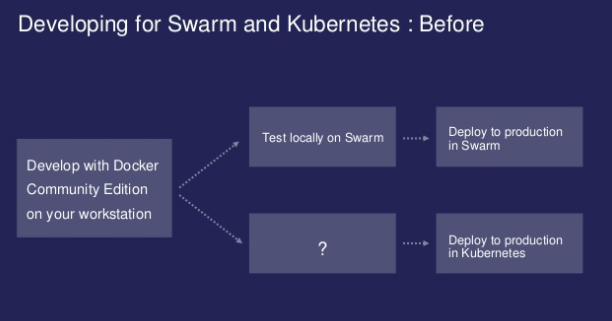 If your production is in swarm, then you can test it locally on Swarm as it is already inbuilt in Docker platform. But if your production environment runs in Kubernetes, then surely there is lot of work to be done like translating files, compose etc. using 3rd party open source tools and negotiating with their offerings. Though it is possible today but it is not still smooth as Swarm Mode CLI. 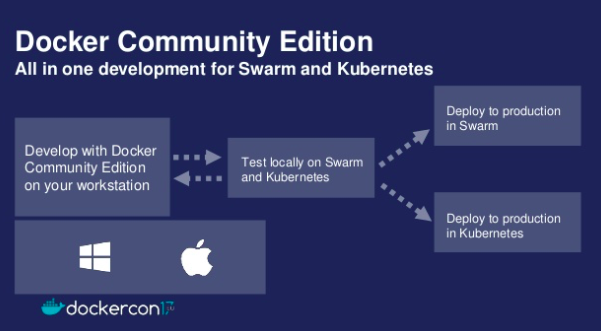 The new Docker platform includes both Kubernetes and Docker Swarm side by side and at the same level as shown below. Please note that it is a real kubernetes sitting next to Docker Swarm and NOT A FORK OR WRAPPER. 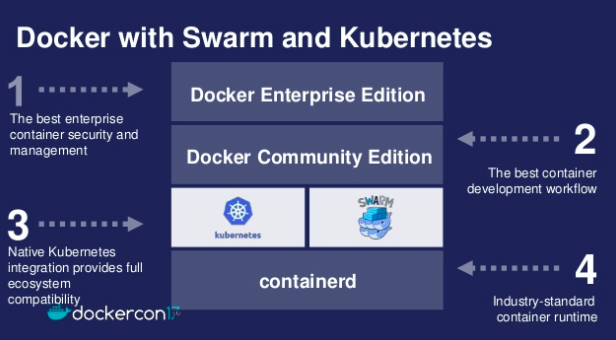 Still not convinced why this announcement?

The docker compose file analyses the input file format and convert it to pods along with creating replicas set as per the instruction set. With the newer Docker for Mac 17.12 release, a new stack command has been added as the first class citizen to Kubernetes CLI. 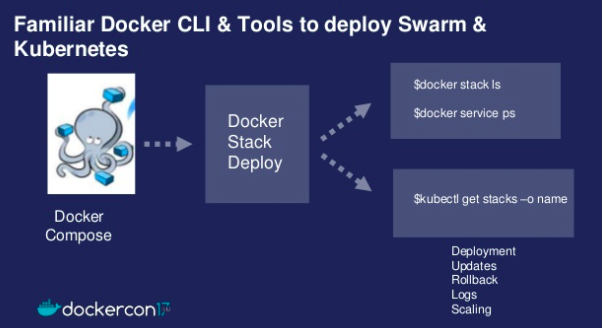 Let us test drive the latest Docker for Mac 17.12 beta release and see how Swarm CLI can be used to bring up both Swarm and Kubernetes cluster seamlessly.

A First Look at Kubernetes Integrated Docker For Mac Platform 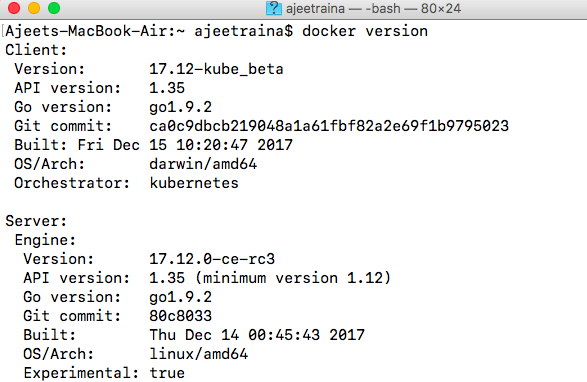 Please note that Kubernetes/kubectl comes by default with Docker for Mac 17.12 Beta release. YOU DON”T NEED TO INSTALL KUBERNETES. By default, a single node cluster is already setup for you by default.

As we have Kubernetes & Swarm Orchestration already present, let us head over to build NGINX services as piece of demonstration on this single node Cluster node.

Let us write a Docker compose file for  nginx image and deploy 3 containers of that image. This is how my docker-compose.yml looks like:

Verifying the NGINX replica sets through the below command:

As shown above, there are 3 replicas of the same NGINX image running as containers.

As you see, kubectl and stack deploy displays the same cluster information.

You can verify that Docker analyses the docker-compose.yaml input file format and  convert it to pods along with creating replicas set as per the instruction set which can be verified using the below YAML output format. 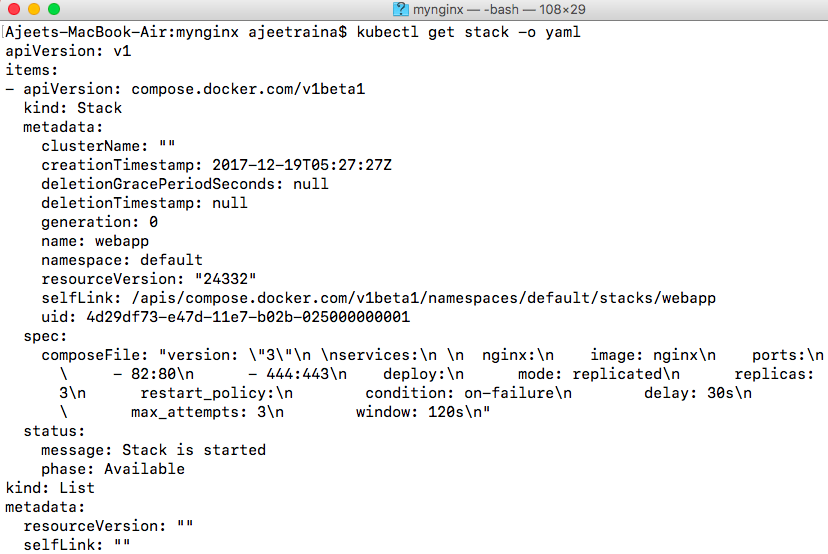 It’s time to verify if the NGINX webpage comes up well: 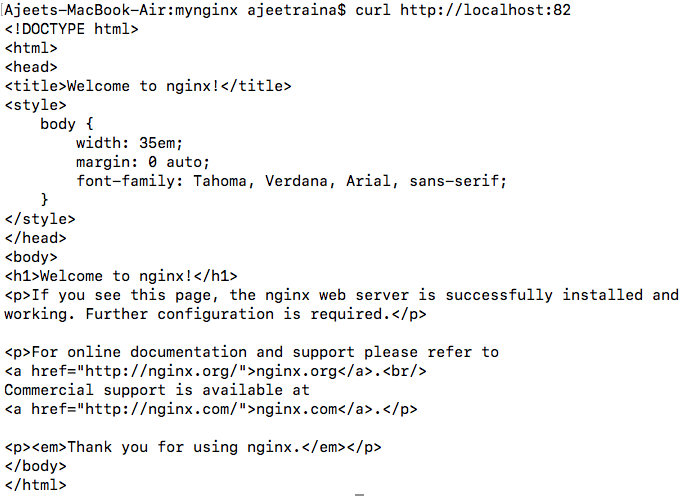 Hence, we saw that NGINX service is running both on Kubernetes & Swarm Cluster side by side.

Run the below Swarm CLI related command to clean up the NGINX service as shown below:

Want to see this in action?