The Rise of Pico: At the Grace Hopper Celebration India

The Grace Hopper Celebration of Women in Computing (GHC) is a series of conferences designed to bring the research and career interests of women in computing to the forefront. It is the world’s largest gathering of women in computing. The celebration, named after computer scientist Grace Hopper, is organized every year by the Anita Borg Institute for Women and Technology and the Association for Computing Machinery.

This year, the conference took place in Bangalore International Exhibition Center( the third consecutive year at this venue) from November 6-8, 2019. The conference accommodated around 5000+ attendees. It was a combination of technical sessions and workshops. It included career sessions, expos, poster session, career fair, awards ceremony, and much more.

What’s Pico all about??

Pico is an open source project which helps in implementing object detection & analytics(Deep Learning) using Docker on IoT devices like Raspberry Pi & Jetson Nano in just simple 3 steps. Imagine you are able to capture live video streams, identify objects using deep learning, and then trigger actions or notifications based on the identified objects – all using Docker containers. With Pico, you will be able to setup and run a live video capture, analysis, and alerting solution prototype. A camera surveils a particular area, streaming video over the network to a video capture client. The client samples video frames and sends them over to AWS, where they are analyzed and stored along with metadata. If certain objects are detected in the analyzed video frames, SMS alerts are sent out. Once a person receives an SMS alert, they will likely want to know what caused it. For that, sampled video frames can be monitored with low latency using a web-based user interface.

The Pico framework uses Kafka cluster to acquire data in real-time. Kafka is a message-based distributed publish-subscribe system, which has the advantages of high throughput and perfect fault-tolerant mechanism. The type of data source is the video that generated by the cameras attached to Raspberry Pi.

This year I submitted proposal for workshop on Pico during June-July along with 3 other DellEMC Engineers. The submission was selected for GHCI conference during the initial week of August 2019. This was our first workshop submission and we were super happy about the news. We confirmed our participation during the early week for September. There were multiple submissions for final Program Material during 2nd week of September. The final Program Materials was submitted on Linklings. This included the profiles and headshots of all the speakers in the session.

During the mid-September, I started building workshop material for Pico. The workshop consisted of 4 separate modules:

You can get access to this workshop under
https://github.com/collabnix/pico/tree/master/workshop

The workshop was scheduled on 8th November and around 80+ attendees attended this workshop. Over 8 Raspberry Pis were arranged per table and it helped attendees to try out CLIs to install Docker on Raspberry Pi. Apache Kafka was pre-installed on AWS Cloud along with Image Processor and consumer scripts. I showcased a LIVE demo where camera module attached to Raspberry Pi was able to detect the audience as “Boxes of People”.

Overall, it was an amazing experience being part of GHCI and running workshop for such a huge audience. It was great to receive loads of positive feedback from the organizers too. Representing DellEMC in such a BIG conference made us feel proud and we went back home collecting lots of appreciation to prepare ourself for the forthcoming events in the near future.

Thanks to Prashant Ksr, Priti Parate & Varalakshmi for all the support for making this happen. Thanks to GHCI organizer for this opportunity and believing on this promising project work. Thank you.

Want to learn more about Pico?

If you want to collaborate around Pico project, visit https://dockerlabs.collabnix.com and join 1600+ community Slack members to discuss further. Looking forward to see you there. 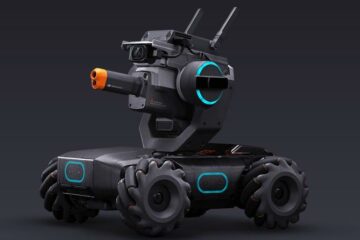 How to assemble DJI Robomaster S1 for the first time?

Spread the love  32,856 views The RoboMaster S1 is an educational robot that provides users with an in-depth understanding of science, math, physics, programming, and more through captivating gameplay modes and intelligent features. Top 10 Features Read more…