A New Docker Enterprise Engine 18.03.0-ee-1 has been released. This is a stand-alone engine release intended for EE Basic customers. Docker EE Basic includes the Docker EE Engine and does not include UCP or DTR.

In case you’re new, Docker is available in two editions:

Docker Community Edition (CE) is ideal for individual developers and small teams looking to get started with Docker and experimenting with container-based apps. Docker Enterprise Edition (EE) is designed for enterprise development and IT teams who build, ship, and run business critical applications in production at scale. Below are the list of capabilities around various Docker Editions: 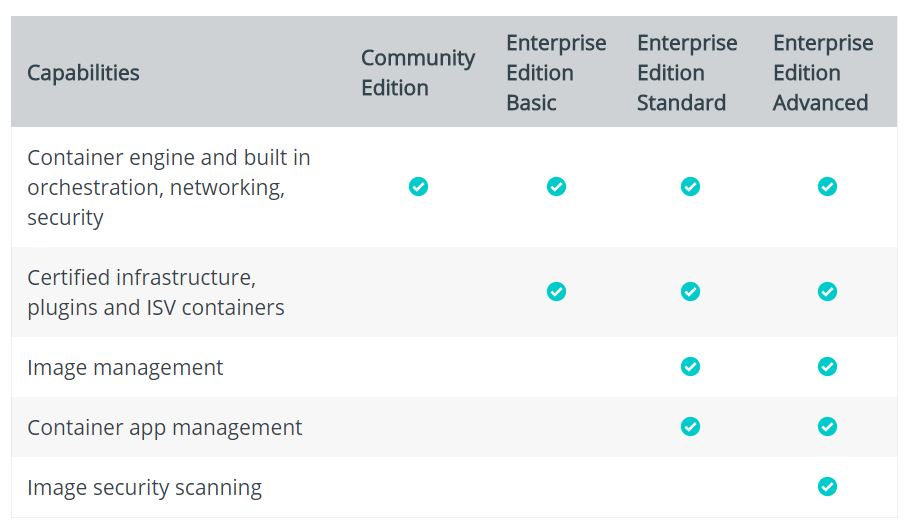 [Please Note – Since UCP and DTR can not be run on 18.03 EE Engine, it is intended for EE Basic customers. It is not intended, qualified, or supported for use in an EE Standard or EE Advanced environment.If you’re deploying UCP or DTR, use Docker EE Engine 17.06.]

In my recent blog, I talked about “Docker EE 2.0 – Under the Hood” where I covered on 3 major components of EE 2.0 which together enable a full software supply chain, from image creation, to secure image storage, to secure image deployment. Under this blog post, I am going to talk about what’s new features have been included under the newly introduced Docker EE 18.03 Engine.

Let us talk about each of these features in detail.

containerd 1.1 announced in April implements Kubernetes Container Runtime Interface (CRI), so it can be used directly by Kubernetes, as well as Docker Engine. It implements namespaces so that clients from different container systems (e.g. Docker Engine and DC/OS) can leverage a single containerd instance on one system while being logically separated. This release allows  you to plug in any OCI-compliant runtime, such as Kata containers, gVisor etc.  And includes  many performance improvements such as significantly better pod start latency and cpu/memory usage of the CRI plugin. And for additional performance benefits it replaces graphdrivers with more efficient snapshotters, that BuildKit leverages for faster build. 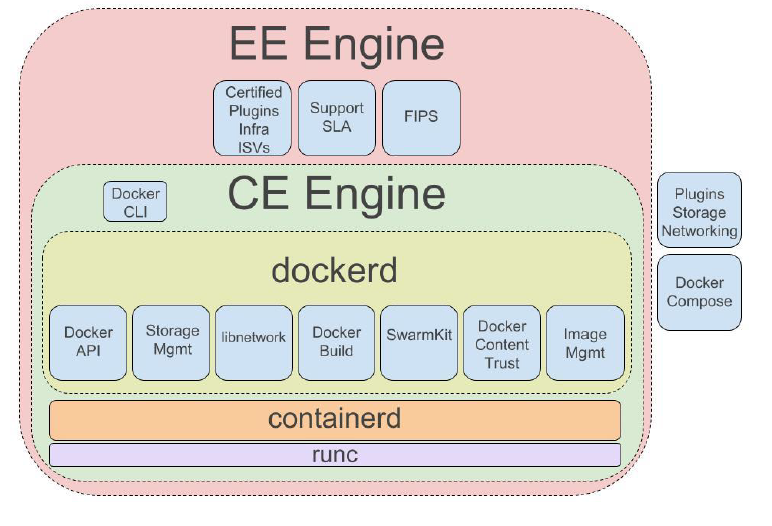 FIPS stands for Federal Information Processing Standard (FIPS) Publication. It is a U.S. government computer security standard which is used to approve cryptographic modules. It is important to note that the Docker EE cryptography libraries are at the “In-process(Co-ordination)” phase of the FIPS 140-2 Level 1 Cryptographic Module Validation Program.The Docker platform is validated against widely-accepted standards and best practices is a critical aspect of the product development as this enables companies and agencies across all industries to adopt Docker containers. FIPS is a notable standard which validates and approves the use of various security encryption modules within a software system.

Docker EE 18.03 Engine added support for Microsoft Windows Server 1709 & Windows Server 1803. With this release, there has been subtle improvement made in terms of density and performance via smaller image sizes than Server 2016. With this release, a single deployment architecture for Windows and Linux via parity with ingress networking and VIP service discovery has been introduced. Reduced operational requirements via relaxed image
compatibility is one of notable feature introduced with this newer release.

Below are the list of customer pain points which Docker, Inc focused for last couple of years:

The –chown support in COPY/ ADD Commands in Docker EE

With Docker EE 18.03 EE Release, there is a support for –chown with COPY and ADD in Dockerfile. This release improve security by enabling developer-specific users vs root for run-time file operations. This release provide parity with functionality added in Docker CE. At this point of time, this has been introduced under Linux OS only.

Support for Compose on Kubernetes CLI

Under Docker EE 18.03 release, now you can use the same Compose files to deploy apps to Kubernetes on Enterprise Edition. This feature is not available under any of Desktop or Community Edition Release.

You should be able to pass –orchestrator parameter to specify the orchestrator.

This means that it should be easy to move applications between Kubernetes and Swarm, and simplify application configuration. Under this release, one can create native Kubernetes Stack object and able to interact with Stacks via the Kubernetes API. This release improve UX and move out of experimental phase. Functionality now available in the main, supported Docker CLI.

Docker Content Trust was introduced first of all in Docker Engine 1.8 and Docker CS Engine 1.9.0 and is available in Docker EE.It allows image operations with a remote Docker registry to enforce client-side signing and verification of image tags. It enables digital signatures for data sent to, and received from, remote Docker registries. These signatures allow Docker client-side interfaces to verify the integrity and publisher of specific image tags.

Docker Content Trust works with Docker Hub as well as Docker Trusted Registry (Notary integration is experimental in version 1.4 of Docker Trusted Registry).It provides strong cryptographic guarantees over what code and what versions of software are being run in your infrastructure. Docker Content Trust integrates The Update Framework (TUF) into Docker using Notary , an open source tool that provides trust over any content