“Does Docker Engine 1.12 has storage discovery similar to Service Discovery and Orchestration Feature? What is the Volume/Persistent Storage story in 1.12 Swarm Mode? Which will be the best solution for my DB persistence? ” – are few common questions which I faced in almost every online meetup, blogs and Docker webinar. Docker 1.12 release was totally focused on Orchestration feature but there has been subtle changes in regards to volumes, volume drivers and storage. Under this blog post, I will be answering the following queries:

Docker offers a basic persistent storage solution for containers in the form of Docker Data Volumes. There has been tremendous amount of focus on OverlayFS which is a modern union filesystem that is similar to AUFS. It has a simpler design, potentially faster and has been in the mainline Linux kernel since version 3.18. It is rapidly gaining popularity in the Docker community and is seen by many as a natural successor to AUFS. If interested, you can refer this to learn more about Overlay2. Let us accept the fact that persistent storage is still an active area of development for Docker. Under Docker 1.12.1, there has been number of improvement over volumes which can be tracked here.

Let us accept the another truth – Docker enthusiast who are looking out to run Docker in the production still count on the ecosystem’s partners like DellEMC (RexRay), ClusterHQ (Flocker), PortWrox, CoreOS and Nutanix to simplify persistent storage in one or different ways. DellEMC RexRay and Flocker are the two most popular persistent storage solution which has been appreciated by the large crowd of Docker users. To my curiosity, I decided to first start looking at RexRay and see how Docker 1.12 Swarm Mode works.

RexRay is an open source storage orchestration engine which delivers persistent storage access for container run-time, such as Docker , and provides an easy interface for enabling advanced storage functionality across common storage, virtualization and cloud platforms. It implements the back-end for a Docker volume driver, providing persistent storage to containers backed by a long list of storage providers. It is actually a distributed toolset to manage storage from multiple platforms. REX-Ray locally advertises consistent methods to create, remove, map, and copy volumes abstract of what storage platform is serving the operating system.

RexRay(prior to 0.4.0) is available as a standalone process while starting 0.4.0 version it works as a distributed model of client-server.The client performs a level abstraction of local host processes (request for volume attachment, discovery, format, and mounting of devices) while the server provides the necessary abstraction of the control plane for multiple storage platforms.

Let us try out installing RexRay for Docker 1.12 Swarm Mode and see how it achieves persistent storage for us. I will be using two node Swarm Mode cluster under Amazon AWS.

Want to setup RexRay in 1 minute?

Yes, you surely can. Run RexRay inside the container.

The official way is simplified too. RexRay is written in Go, so there are typically no dependencies that must be installed alongside its single binary file. The manual methods can be extremely simple through tools like curl. Installing RexRay is just a simple on-liner command: 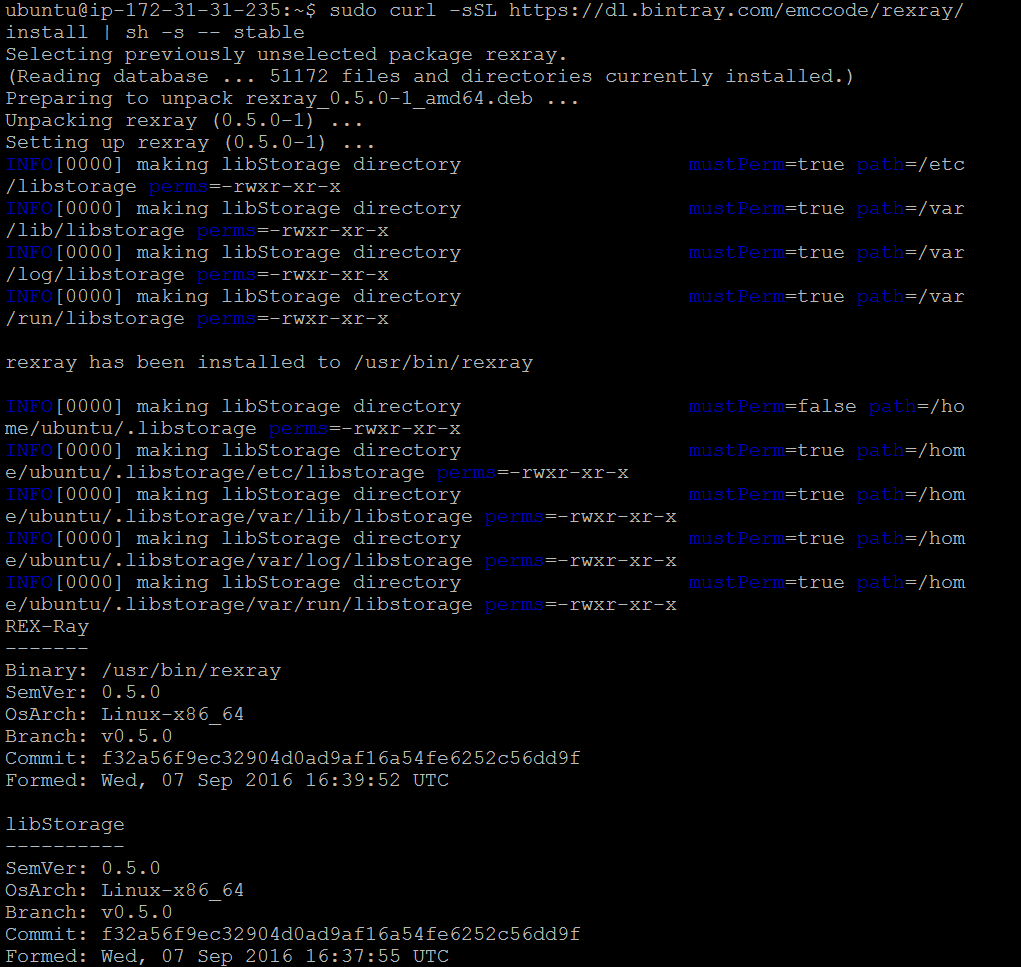 RexRay 0.5.0 is the latest release and setting it up is a matter of few seconds. We can check the RexRay version information through the below command: 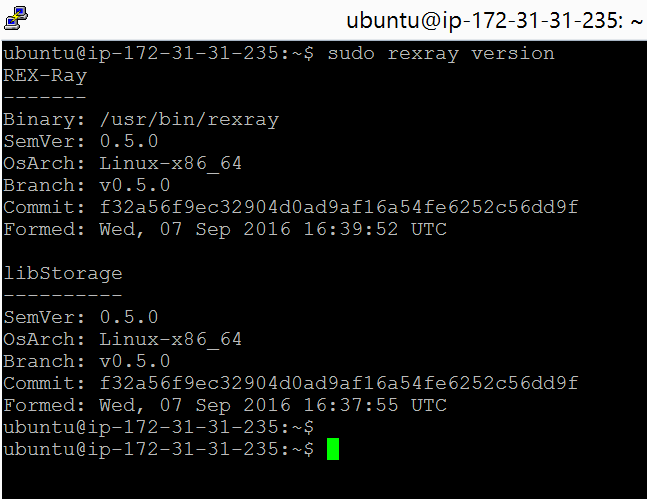 RexRay CLI is feature-rich and there are various options available to play around with the storage volume management capabilities as shown below: 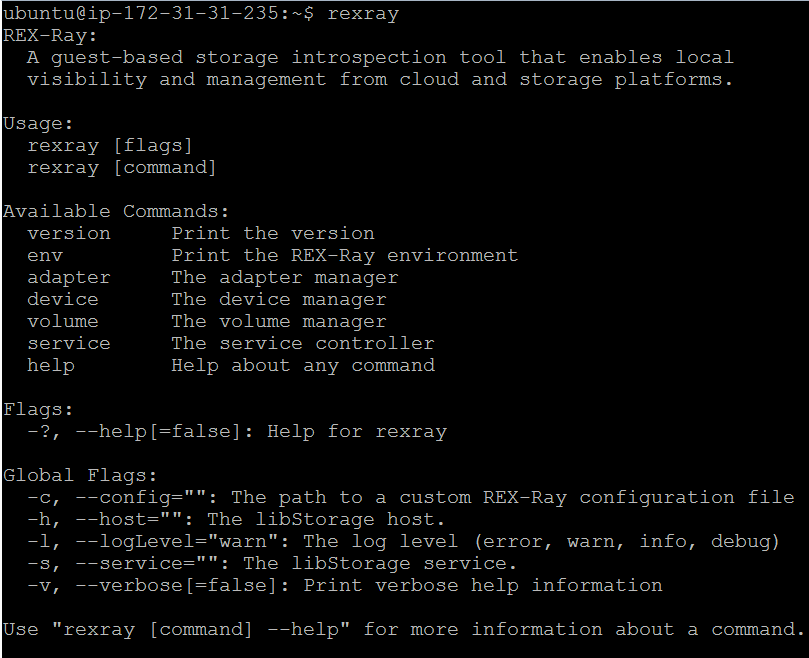 One of the compelling feature of RexRay is that it can be ran as an interactive CLI to perform volume management capabilities plus it can be ran as a service to support Docker and other platforms that can communicate through HTTP/JSON. For Example, one can create a config.yml file as shown below:

To retrieve the information about Storage volume, one can issue the below command: 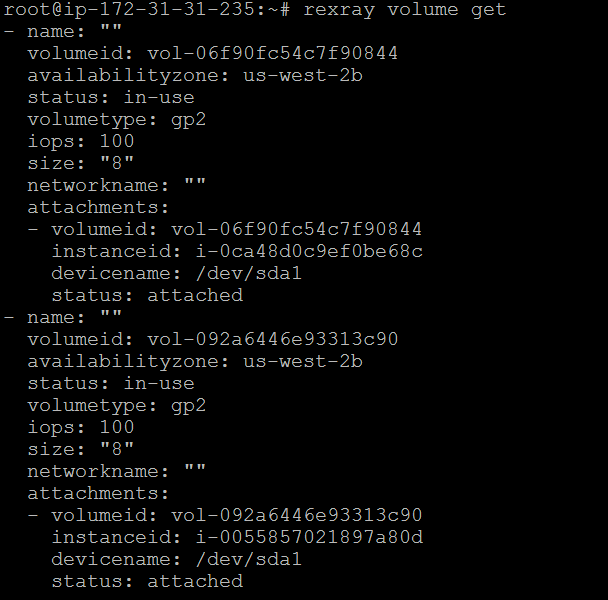 How does Persistent storage work in case of new service API?

Docker 1.12 comes with 3 new APIs – service, swarm and node. I found users complaining about why -v option has been dropped in the newer Docker 1.12 swarm mode. The reason – We are not just talking about one single host which runs the docker container, here we are talking about orchestration feature which spans across the hundred of cluster nodes.The  -v  was dropped because services don’t orchestrate volumes. It is important to note that under Docker 1.12.1 we specifically use the term  mount  because that is what services do. You can have a service that has a template for creating a volume that the service then mounts in for you, but it does not itself handle volumes, so it’s intentionally left out for now. The syntax looks like one shown below for NFS mount:

How to deploy a simple Web Application for Docker 1.12 using RexRay?

Now this is an interesting topic and I was just curious to implement this. I already had RexRay 0.3.0 installed on my AWS instances and hence wanted to quickly try it and see how Swarm Mode handles the persistent storage functionality:

I assume you have RexRay up and running in your environment. If not, setting up RexRay 0.3.0 is a matter of few seconds. DellEMC {code} team did a great job in providing “REX-Ray Configuration Generator” through this link to create config.yml file for your RexRay configuration. In case you want to keep it simple, you can export the below variables too:

Done. Next, lets create a RexRay volume which Docker container is going to use:

I have created a rexray volume called collabray of certain size(for demonstration purpose). Also, you need to mount the volume for Docker to understand as shown above.

You can check that the above command created EBS volume of 7GiB with name “collabray” as shown below:

You can easily verify that the /dev/xvdh gets mounted on /var/lib/rexray/volumes/collabray automatically as shown below:

Great ! Now comes the most important part of the whole blog. We will be creating WordPress application as a service where MySQL DB will be mounted to the RexRay volume so as to make DB a persistent storage application.  The actual command is shown below:

In the above example, we are using –mount option for the source “collabray” as RexRay volume, targeting /var/lib/mysql as our backup directory using the volume driver called “RexRay”.

We can use docker inspect command for the particular service to verify the RexRay volume being used by container running the service. 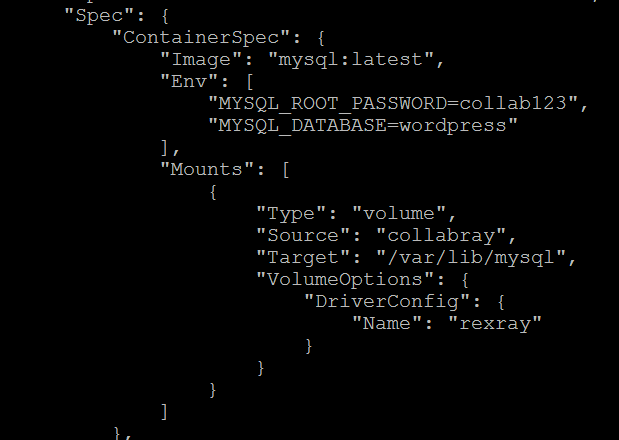 Let’s check if it dumps the DB related files under /var/lib/rexray/volumes/collabray/data or not.

Wow ! MySQL database related files are present under the mounted location which will be our persistent storehouse for our cluster and RexRay does that for us very safely.

Next, run the wordpress frontend service which is going to discover the backend wordpressdb1 using the unqualified domain name as shown below:

As shown in the example above, we are not using storage volume for wordpressapp but you might want to backup /var/www/html in different volume created using RexRay.

Finally, I have WordPress application ready to be installed in Swarm Mode using RexRay volume. You can quickly view it using lynx text UI as shown below: 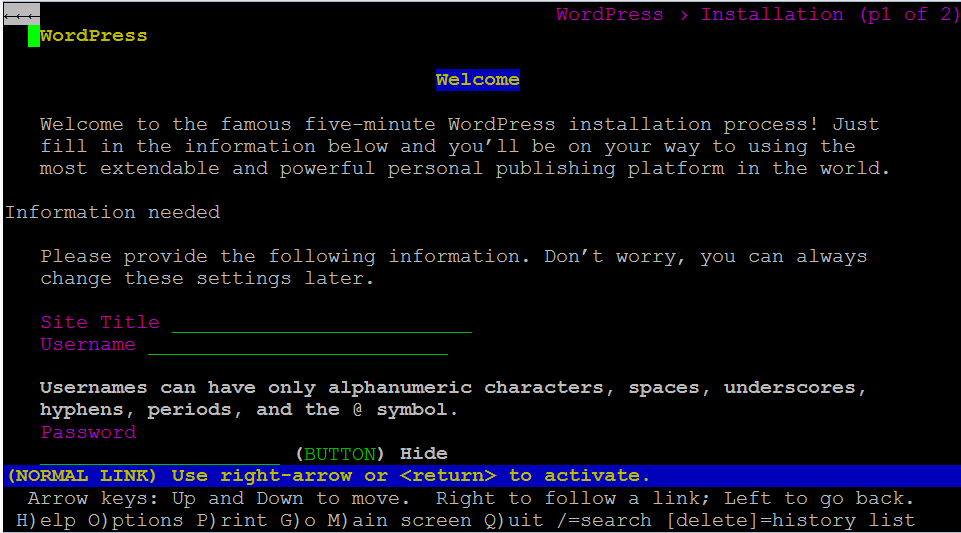 RexRay provides an efficient snapshot capability too.  First let us find out the volumeid for “collabray” through the below command:

You can verify the Snapshot looking at AWS Management dashboard too.

In the future post, I will be covering more on libstorage and newer RexRay 0.5.0 implementation with ScaleIO for Docker 1.12 Swarm Mode.