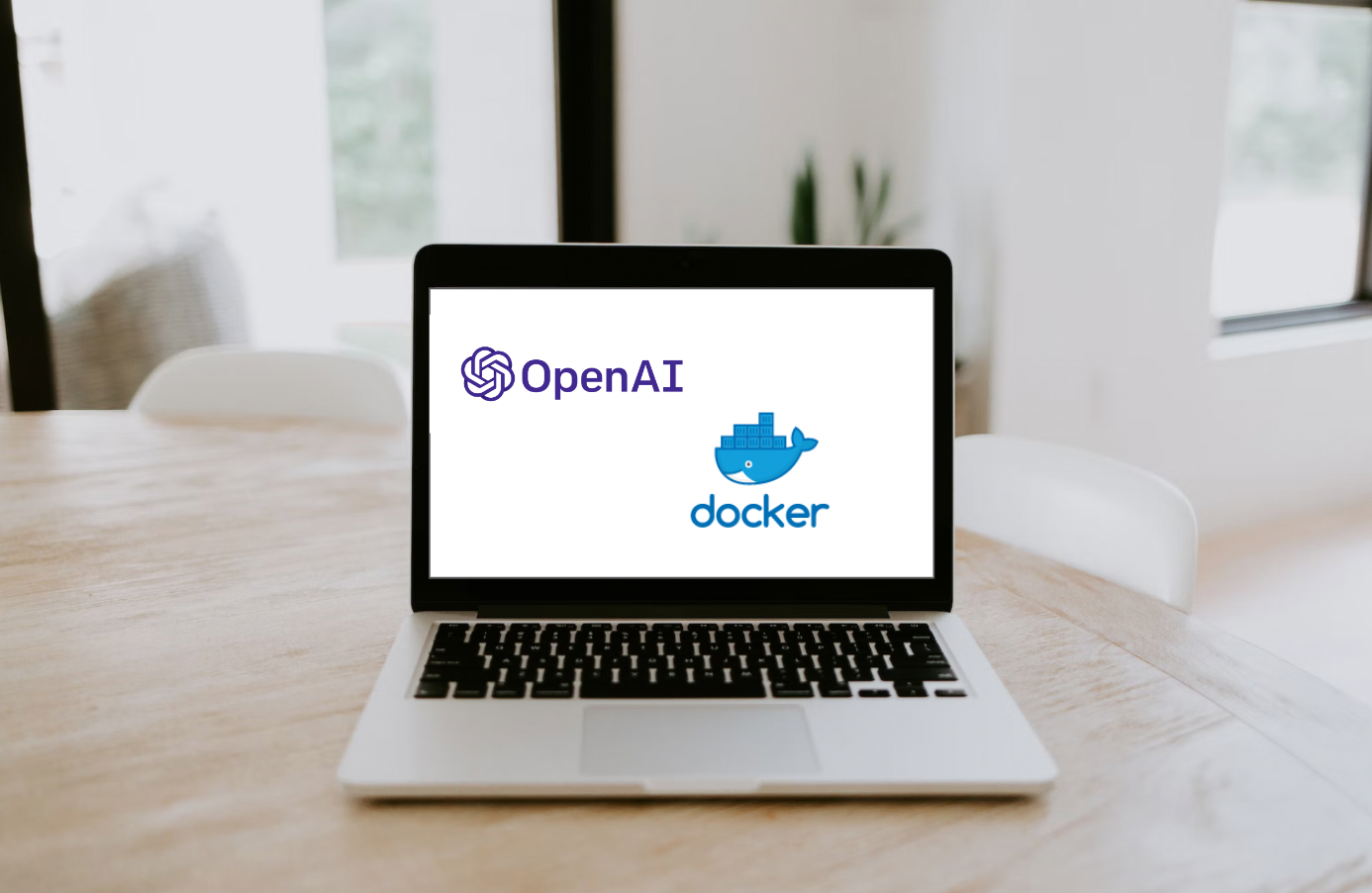 GPT (short for “Generative Pre-trained Transformer”) is a type of language model developed by OpenAI. OpenAI is a nonprofit organisation based in San Francisco, California focused on advancing artificial intelligence in a responsible and safe manner. It was founded in 2015 by a group of high-profile entrepreneurs and researchers, including Elon Musk and Sam Altman, to promote and conduct research on AI aligned with the values of the broader scientific community.

GPT is pre-trained on a large dataset of text and can be fine-tuned for specific tasks or languages by training on additional data. It has achieved state-of-the-art results on many language tasks and is widely used in the field of natural language processing. GPT can be used in a variety of applications, such as chatbots and conversational agents. In the context of chat, GPT could be used to power a chatbot that can hold natural conversations with users and respond to their messages in a way that is coherent and contextually appropriate.

ChatGPT is an AI-based chatbot system. It  uses natural language processing (NLP) to generate conversations. The chatbot system enables users to ask queries directly or ask in the form of a story, and the bot will respond with relevant, natural-sounding answers and topics. The interface is perfectly designed to simulate a human conversation, creating natural engagement with the bot. Most of the responses from ChatGPT sound quite human-like because they were trained on vast amounts of data written by people.

Is Chat GPT free of cost?

Yes, it’s free at this point of time. But OpenAI team might monetise it in the future to deal with “eye-watering” compute costs.

When using Chat GPT, you provide the model with some initial text (such as a prompt or a question) and it generates a response based on what it has learned from its training data. The model uses its understanding of language and context to generate a response that is coherent and contextually appropriate.

For Example, I asked ChatGPT the following set of questions:

Me: Hello, can you write a Dockerfile for a NodeJS app?

Result: Definitely, it was an impressive start. I loved the way it explained the Dockerfile line by line. Well articulated.

Me: Thanks, can you build an optimised Docker image for the same NodeJS app using Multi-Stage Build

Results: Definitely, the result was quite impressive. Loved the way it explained the various stages involved in the Multi-Stage Build. Keep Reading…

Me: Can you write the same Dockerfile using Multi-Stage build but with developer and production stage

Sure! Here is an example of a Dockerfile that uses a multi-stage build to create a container for a Node.js app, with separate stages for the development and production environments:

In this Dockerfile, the first stage uses the Node.js 12 base image and installs the app’s dependencies. It then builds the app and copies the build artifacts to the second and third stages.

The second stage uses the Node.js 12 base image and copies the build artifacts from the first stage into the container. It then installs the development dependencies and runs the npm run dev command to start the app in development mode.

The third stage also uses the Node.js 12 base image, and copies the build artifacts from the first stage into the container. It then installs the production dependencies and runs the npm start command to start the app in production mode.

Using a multi-stage build allows you to separate the build, development, and production environments, which can make it easier to manage different configurations for each environment.

I hope this helps! Let me know if you have any questions.

Me: Thanks for building a Dockerfile for NodeJS using Multi-Stage. Can you build it for Jetson Nano based system? 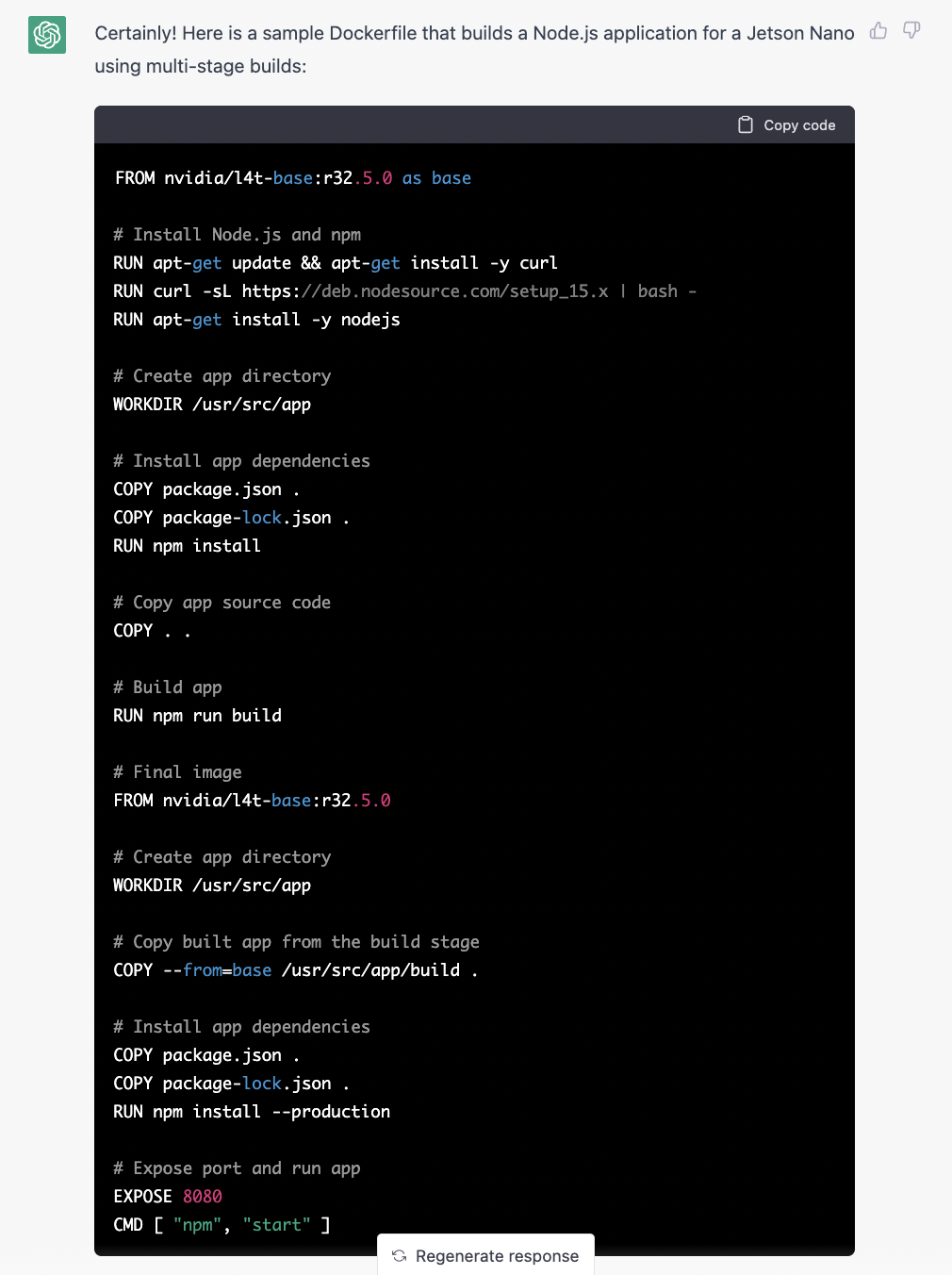 Me: How to deploy Kubernetes Pods using this Dockerfile 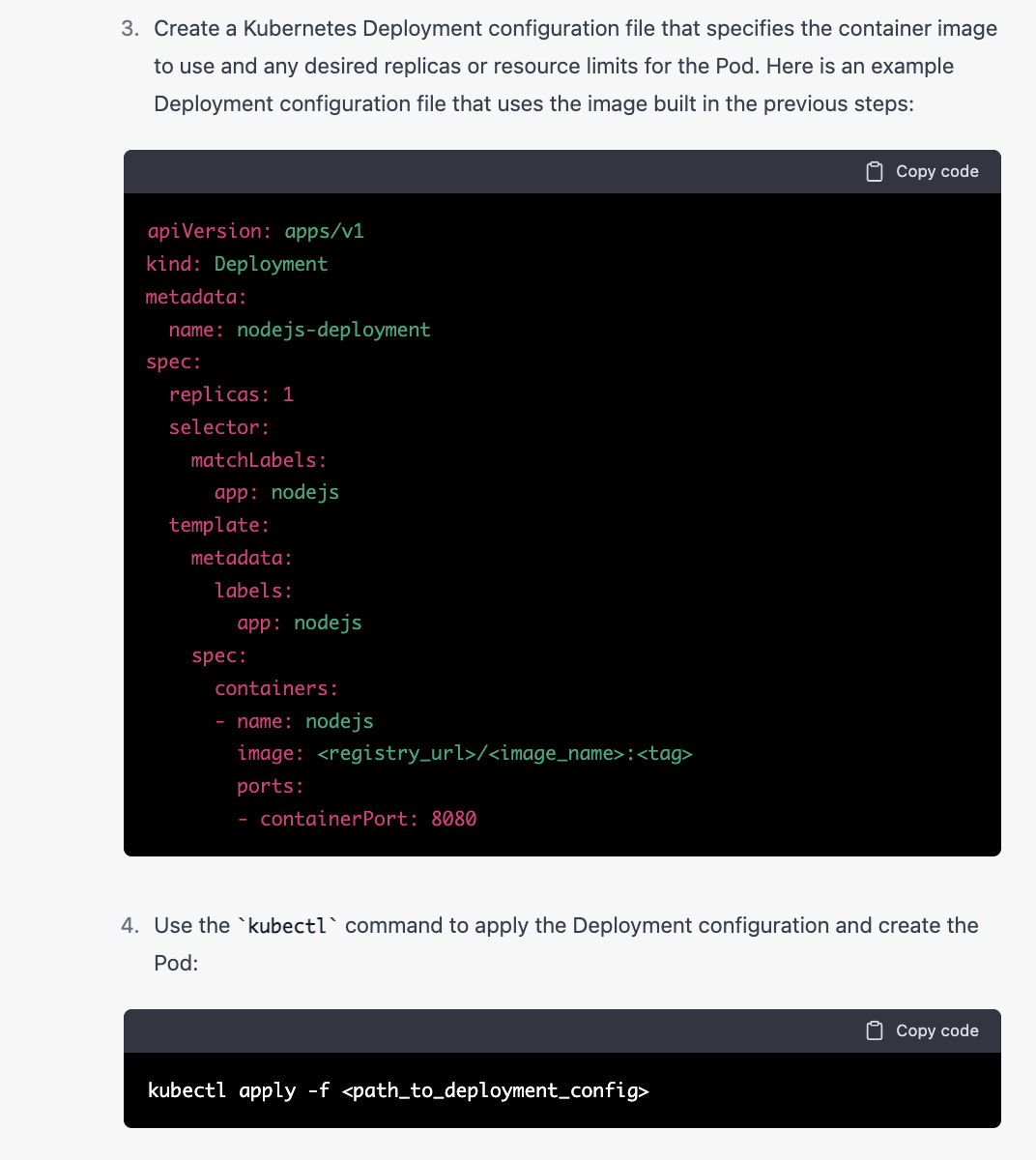 To generate its responses, Chat GPT uses a technique called transformer-based language modelling. This involves using a series of self-attention mechanisms to process the input text and generate the output text. The model is trained to predict the next word in a sequence based on the words that come before it, which helps it learn the structure and patterns of language.