Under the Hood: Demystifying Docker For Mac CE Edition

Docker is a full development platform for creating containerized apps, and Docker for Mac is the most efficient way to start and run Docker on your MacBook. It runs on a LinuxKit VM and NOT on VirtualBox or VMware Fusion. It embeds a hypervisor (based on xhyve), a Linux distribution which runs on LinuxKit and filesystem & network sharing that is much more Mac native. It is a Mac native application, that you install in /Applications. At installation time, it creates symlinks in /usr/local/bin for docker & docker-compose and others, to the commands in the application bundle, in /Applications/Docker.app/Contents/Resources/bin.

One of the most amazing feature about Docker for Mac is “drag & Drop” the Mac application to /Applications to run Docker CLI and it just works flawlessly. The way the filesystem sharing maps OSX volumes seamlessly into Linux containers and remapping macOS UIDs into Linux is one of the most anticipated feature.

Under this blog, I will deep dive into Docker for Mac architecture and show how to access service containers running on top of LinuxKit VM. 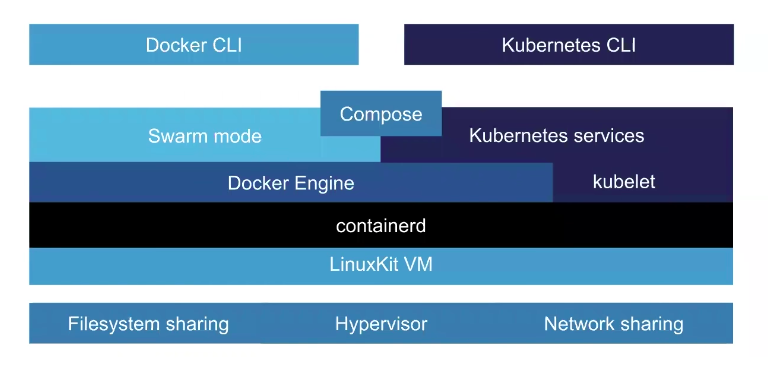 At the base of architecture, we have hypervisor called Hyperkit which is derived from xhyve. The xhyve hypervisor is a port of bhyve to OS X. It is built on top of Hypervisor.framework in OS X 10.10 Yosemite and higher, runs entirely in userspace, and has no other dependencies. HyperKit is basically a toolkit for embedding hypervisor capabilities in your application. It includes a complete hypervisor optimized for lightweight virtual machines and container deployment. It is designed to be interfaced with higher-level components such as the VPNKit and DataKit.

Just sitting next to HyperKit is Filesystem sharing solution. The osxfs is a new shared file system solution, exclusive to Docker for Mac. osxfs provides a close-to-native user experience for bind mounting macOS file system trees into Docker containers. To this end, osxfs features a number of unique capabilities as well as differences from a classical Linux file system.On macOS Sierra and lower, the default file system is HFS+. On macOS High Sierra, the default file system is APFS.With the recent release, NFS Volume sharing has been enabled both for Swarm & Kubernetes.

There is one more important component sitting next to Hyperkit, rightly called as VPNKit. VPNKit is a part of HyperKit attempts to work nicely with VPN software by intercepting the VM traffic at the Ethernet level, parsing and understanding protocols like NTP, DNS, UDP, TCP and doing the “right thing” with respect to the host’s VPN configuration. VPNKit operates by reconstructing Ethernet traffic from the VM and translating it into the relevant socket API calls on OSX. This allows the host application to generate traffic without requiring low-level Ethernet bridging support.

On top of these open source components, we have LinuxKit VM which runs containerd and service containers which includes Docker Engine to run service containers. LinuxKit VM is built based on YAML file. The docker-for-mac.yml contains an example use of the open source components of Docker for Mac. The example has support for controlling dockerd from the host via vsudd and port forwarding with VPNKit. It requires HyperKit, VPNKit and a Docker client on the host to run.

Sitting next to Docker CE service containers, we have kubelet binaries running inside LinuxKit VM. If you are new to K8s, kubelet is an agent that runs on each node in the cluster. It makes sure that containers are running in a pod. It basically takes a set of PodSpecs that are provided through various mechanisms and ensures that the containers described in those PodSpecs are running and healthy. The kubelet doesn’t manage containers which were not created by Kubernetes.On top of Kubelet, we have kubernetes services running. We can either run Swarm Cluster or Kubernetes Cluster. We can use the same Compose YAML file to bring up both the clusters side by side.

Curious about VM and how Docker for Mac CE Edition actually look like?

Below are the list of commands which you can leverage to get into LinuxKit VM and see kubernetes services up and running. Here you go..

How to enter into LinuxKit VM?

Open MacOS terminal and run the below command to enter into LinuxKit VM:

Listing out the service containers:

How to display containerd version?

How shall I enter into docker-ce service container using containerd?

Ajeet Raina Follow Docker Captain, ARM Innovator & Docker Bangalore Community Leader.
« Top 5 Exclusive Features of Docker For Mac That You Can’t Afford to Ignore
How to Get the Most Out of Dockercon 2018 – (June 12 – 15th, SF) »